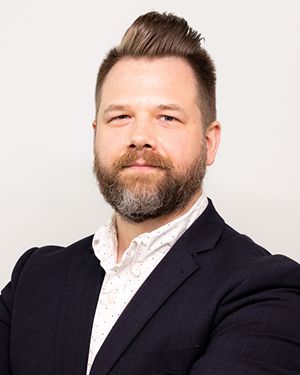 "It is extremely exciting to have a role in changing the way genetic therapies are delivered."

Mr. Hill is Director of Business Development at Incisive Genetics Inc. He co-founded the company and co-invented the Incisive Delivery System™.

After graduating with a Bachelor of Science degree from the University of Minnesota in 2004, Mr. Hill moved to Canada where he joined Dr. Blair Leavitt’s lab at the University of British Columbia. For the next decade and a half, he worked closely with Dr. Leavitt and Ms. Wagner to create and test new delivery systems that would open the door to a new era in precision medicine. Together, their work led to the invention behind the novel Incisive Delivery System™ technology.

As lab manager, Mr. Hill oversaw teams of researchers, co-designed pre-clinical trials and liaised with pharmaceutical companies. In this role, he successfully matched the capabilities of a scientific laboratory with the needs of commercial partners.

Mr. Hill is an expert in animal modeling, having led pre-clinical trial testing on a number of potential therapeutic compounds. He co-authored publications on viral and non-viral delivery of macromolecules, as well as the genetics of disease, particularly Huntington’s and Parkinson’s diseases.

In addition to his scientific work, Mr. Hill and his partner created and built Roasters Hot Sauce, a successful gourmet food company in Vancouver.

As director of business development, Mr. Hill is responsible for bridging the science done in the laboratory with the commercial world.